Our Ancestors among Us

I'd like to share this story about my great uncle Venanzio.  I never met him.  He was from Italy.  His brother, my grandfather, came to the United States together through Ellis Island, NY.

In 1985, when my first son was born, I made a trip to New York to see family members.   I was traveling with my mother and father.  My father wanted to visit the gravesite of his father, my grandfather.   We found the grave site and while standing there, he said he wanted to find his uncle Venanzio's grave site.  I had never heard of an uncle named Venanzio and had no idea that he even once existed. We walk around the cemetery in search of his tombstone.   We find it and the tombstone was very weatherbeaten and worn thin.  There was no engraving, someone hand-painted his name, a cross and the date of death. The stone appeared flat and smooth.  You could not see the date of birth at all.

I had my camera with me.  It was a Nikon FE film camera.   I photographed the tombstone.  My mother, who was with us went back to the car to get her camera.  My father left and I stood alone at the grave site.  In that instant the sky turned a pink color and everything was glowing.  I felt a sense of peace come over me as I stood in front of the tombstone.  There was complete silence and it felt as if time was suspended.  The pink glow got brighter.  I looked down at the tombstone, it was as if I was looking at a new tombstone that was freshly engraved with his name and dates. There was texture and depth to the stone.  His name was deeply engraved along with the cross and both his birth date and date of death were visible.  I stood stunned for a moment and then photographed what I saw.

Here are the two photographs, taken within about 5 minutes of each other with the same camera, same settings, same roll of film, nothing changed.   See for yourself.  It's magical 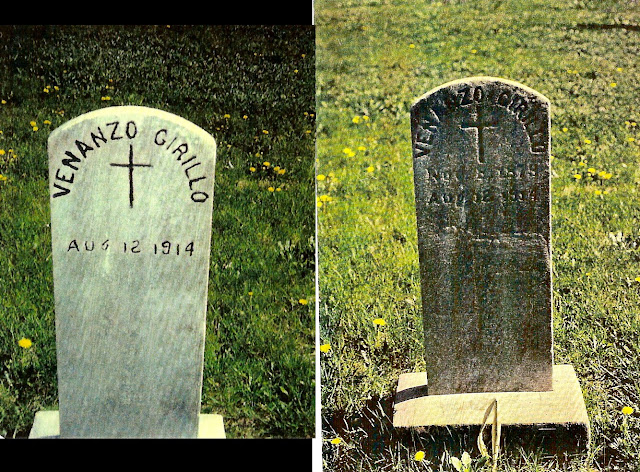 After I took these, I stood for a moment and kept my eye on the tombstone.  The pink glow then faded and the tombstone went back to looking like the first photograph.   I walked back to the car and didn't say anything to my parents other than to ask my mother why she didn't come back to take a picture.  She said she heard a voice tell her to stay in the car.  He didn't want her there.  I then proceeded to tell her what happened.

Now the search began. I needed to know more about my great uncle.  I started contacting any relative that may have known anything . Most of them were deceased but I was able to find out some information.  After researching for several years I finally found out the truth about my great uncle.  He was shot and killed by his brother in law in a dispute over a lady friend.   My uncle Venanzio wanted to be remembered.

It explains why months before this incident I was receiving messages from someone calling themself Venanzio.  I was unable to understand what he was trying to tell me.  He guided my father to find his grave site and then came to me directly by showing me his tombstone and wanting me to tell his story which I have done.   I have placed his name on the wall at Ellis Island in remembrance of his life.  He was touched by this.

Our ancestors of long ago, whether we have known them personally does not matter.  They live on with us and will work to protect and guide us while we are on this earthwalk.   Here is the proof for those who are skeptical.
Posted by wingedwolf at 8:04 PM

wingedwolf
Horses are my passion. I have been involved with all aspects of their care and training for over 30 years. The wisdom gained from those years of experience and devotion is what I bring to you.